The JR Chuo-Sobu Line is formed of two railways that extend from Tokyo to regions lying west and east of the capital. It can be confusing but a good way to tell them apart is by remembering that the yellow-coded Sobu Line trains stop at every station, while the red-coded ones are on the Chuo Line Rapid Service do not. The Chuo-Sobu Line forms an important east-west transport corridor extending from Tokyo’s western suburbs through Shinjuku to the Ueno area and then onward to the eastern suburbs and into Chiba Prefecture. 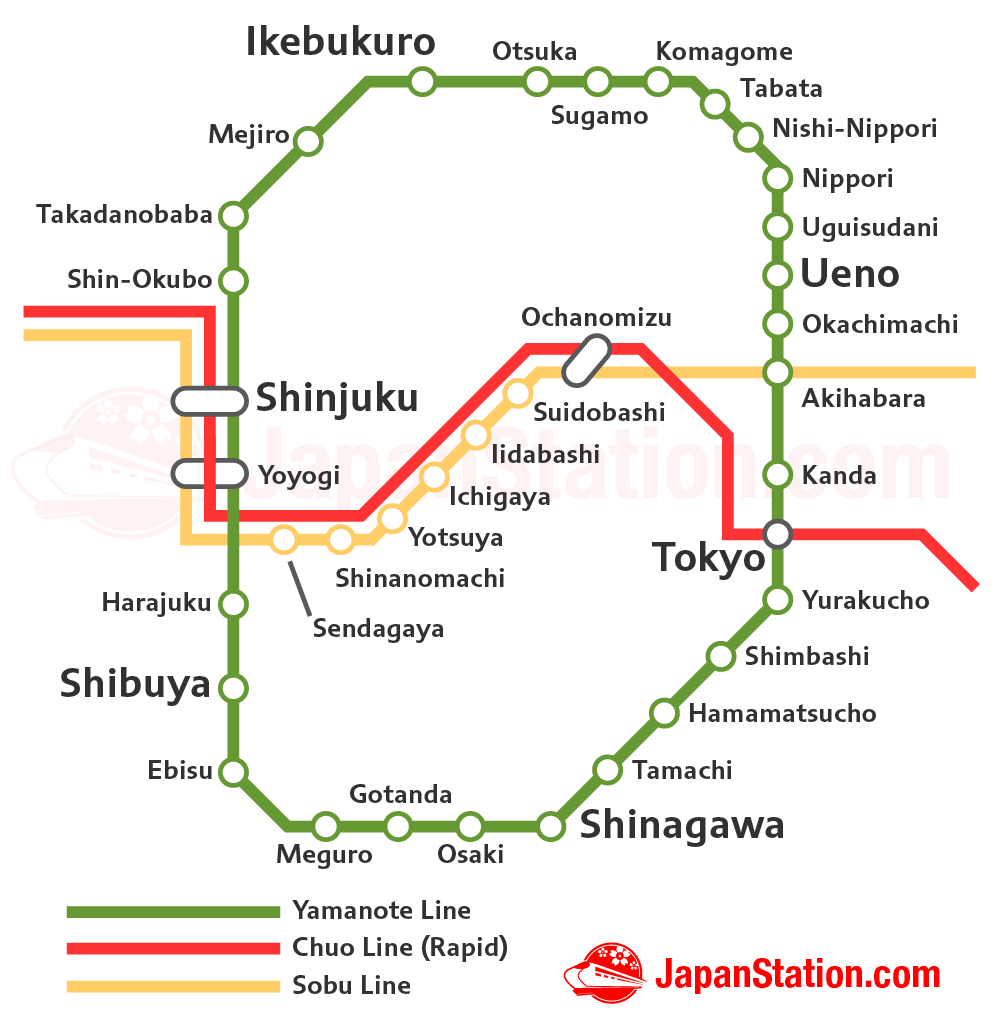 The Chuo Line Rapid services extend from Tokyo Station to Takao Station. They operate on tracks used by the Chuo Main Line, a major railway for eastern Japan that has services going all the way from Tokyo Station, through the mountainous heart of Honshu Island, and through to Nagoya (which is easier to reach by Tokaido Shinkansen bullet train from Tokyo).

Chuo-Sobu Line trains depart from platforms 7, 8, 11, 12, 13 and 16 at JR Shinjuku Station. If in doubt about which one to take, consult a JR staff member at the ticket gates. 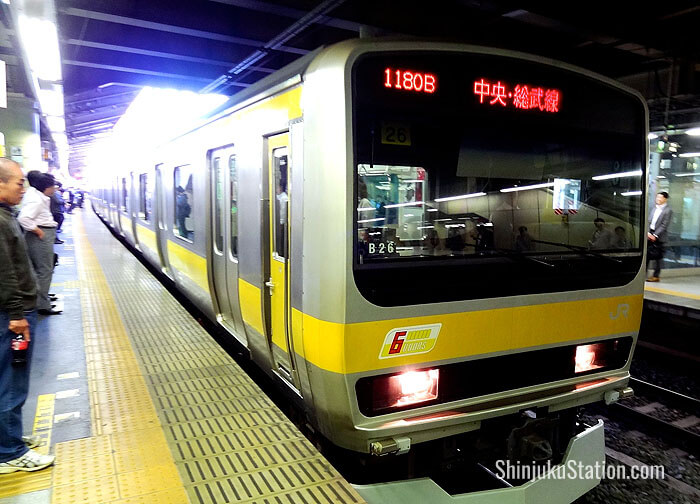 Exit here for a one-stop journey on the Keio Takao Line for Takaosanguchi, at the foot of one of Tokyo’s most popular mountains. At 599 meters, Mt. Takao is a relatively easy climb for a day trip and is especially beloved for its fall colors and views of Mt. Fuji on clear days; a funicular goes halfway up the mountain. Mt. Takao also has a renowned Buddhist temple and Shinto shrine.

Get off at Mitaka Station to visit the Ghibli Museum, a homage to renowned anime director Hayao Miyazaki and Studio Ghibli. Be sure to buy tickets before you go, however. The museum is a 15-minute walk along the Tamagawa Josui canal or hop on a community bus. The museum is located in Inokashira Park; nearby Inokashira Station has trains bound for Shibuya Station.

Manga and anime fans will want to check out this densely crowded neighborhood for its enormous Nakano Broadway shopping mall, a magnet for otaku (geeks) in Tokyo. Mandarake, Anime World Star and Robot Robot are some of the specialist retailers dealing in vintage collectibles, new and old comics and figurines. Compared to the enormous otaku mecca of Akihabara (see below), Nakano feels much less overwhelming and has a residential neighborhood atmosphere.

Take a Sobu Line (yellow stripe) train to get to Akihabara, an electronics district with its roots in the black markets that cropped up here after World War II. You’ll find major electronics retailers such as Yodobashi Camera, Sofmap, Onoden and Laox. The neighborhood is also home to otaku (geek) shops catering to manga, anime and video game fans. The Tokyo Anime Center is also a good spot to catch up on recent animation trends. There’s a thriving maid café industry here – look out for the street touts in French maid costumes. Don’t miss the Gundam Café, based on the Mobile Suit Gundam anime franchise, and the AKB48 Café & Shop, inspired by Japan’s biggest all-girl pop group, facing the plaza on the station’s Akihabara Electric Town exit.

Akihabara Station is also served by the JR Yamanote Line, the JR Keihin-Tohoku Line, the Tokyo Metro Hibiya Line and the Tsukuba Express. 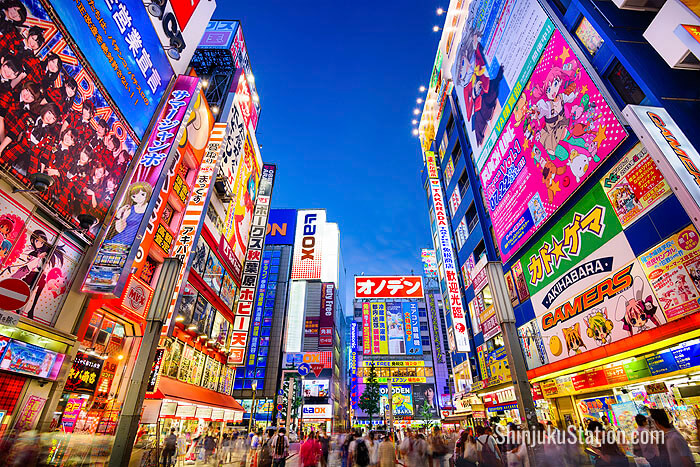 Colorful Akihabra draws otaku manga, anime and gaming fans from Japan and around the world

If there’s a sumo wrestling tournament (basho) going on, head to Ryogoku on the far side of Tokyo’s Sumida River. The Kokugikan Stadium right next to Ryogoku Station is the premier venue for sumo in Japan and offers a pageant of tradition in addition to loincloth-clad giant men battling it out. Tournaments happen here in January, May and September. If there’s no basho on, you can check out the sumo museum at the stadium and local restaurants specializing in chanko nabe, a favored stew of sumo grapplers. There are also a number of sumo beya (sumo training stables) where visitors are allowed to watch training sessions. The official Nihon Sumo Kyokai webpage has detailed information on tournaments, tickets, wrestlers and training stables. 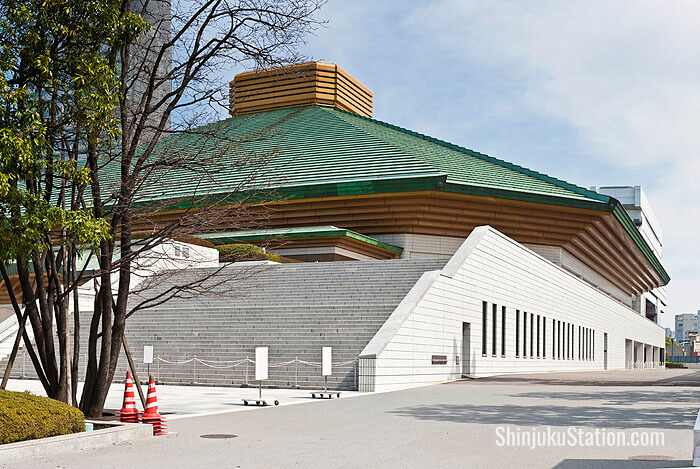 Jump on a Chuo Line Rapid train for Tokyo Station and you’ll go right across the middle of Tokyo. The terminus for the Chuo Line Rapid trains, Tokyo Station is also the starting point for Japan’s most popular bullet train line, the Tokaido Shinkansen, and also has services for northbound Tohoku, Yamagata, Akita, Joetsu and Hokuriku Shinkansen lines. Visitors to Tokyo Disneyland can get to the theme park via the Keiyo Line’s underground platforms at Tokyo Station. The Narita Express also stops here. 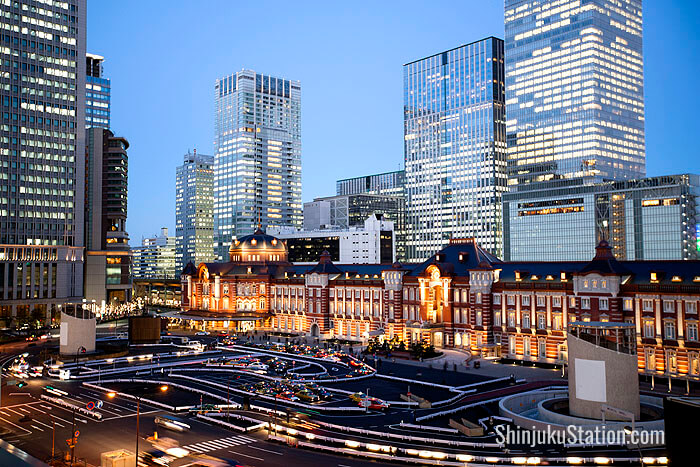 Tokyo Station is a large shopping and dining complex, with a section devoted to character goods shops and ramen noodle shops on the Yaesu (east) side of the station. The recently renovated Marunouchi (west) side, originally built in 1914, is a magnificent example of elegant Victorian red brick architecture and is the greatest legacy of architect Tatsuno Kingo. It faces the Imperial Palace and the Marunouchi business district, home to some of the most expensive real estate in the country.