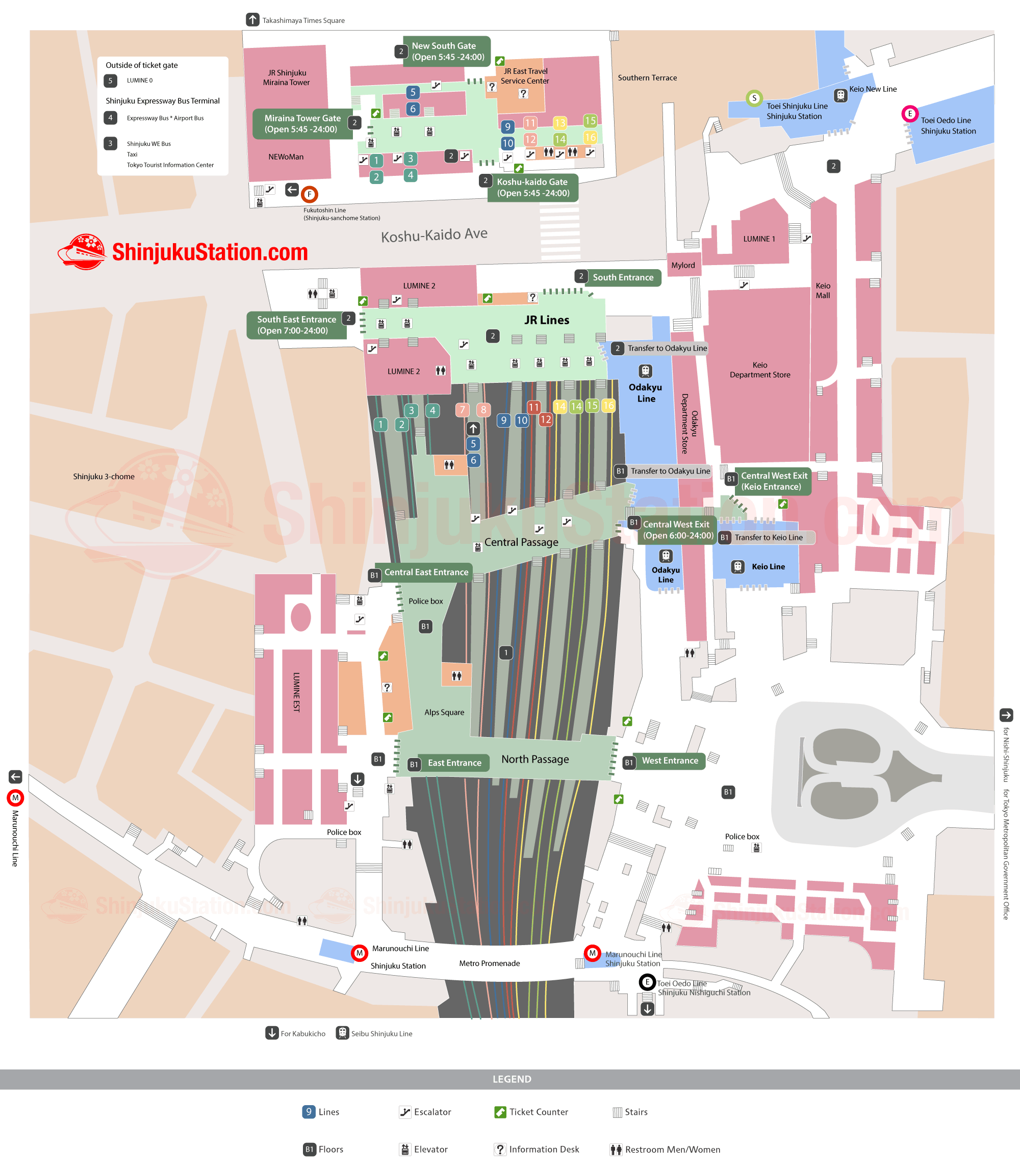 Welcome to Shinjuku Station – if this is your first time, buckle up! Shinjuku is the world’s busiest train station, handling over 3.6 million passengers a day. It serves as an essential transit hub for the Tokyo rail and subway network as well as rail links throughout the greater Kanto region surrounding the capital. While Japan’s famous Shinkansen bullet trains, which link the capital with Kyoto and other cities, do not stop at Shinjuku, cross-city trains can get you to Shinkansen at Ueno, Tokyo and Shinagawa stations. Meanwhile, express trains connect Shinjuku with Narita Airport via the Narita Express (N’EX) rail service. 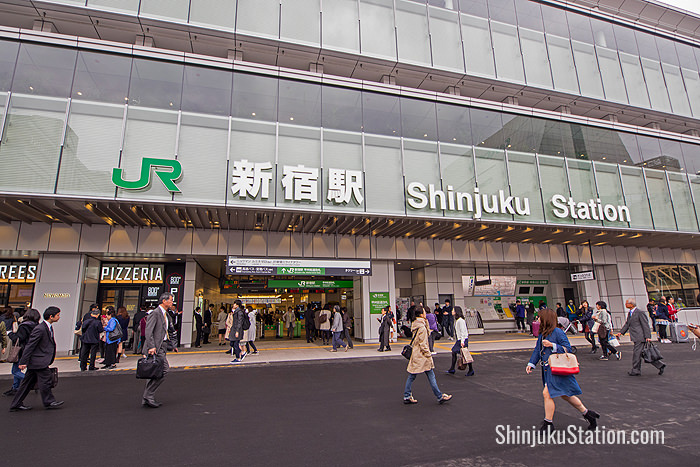 This article will familiarize you with the layout of main hub of Shinjuku Station, its train lines and platforms, and explain the many satellite stations for rail and subway services.

Shinjuku Station has over 200 exits and many platforms spread out over a large area, along with department stores covering nearly all sides. If you feel confused, you’ve got company; Shinjuku can even bewilder Tokyoites who ride the rails every day. 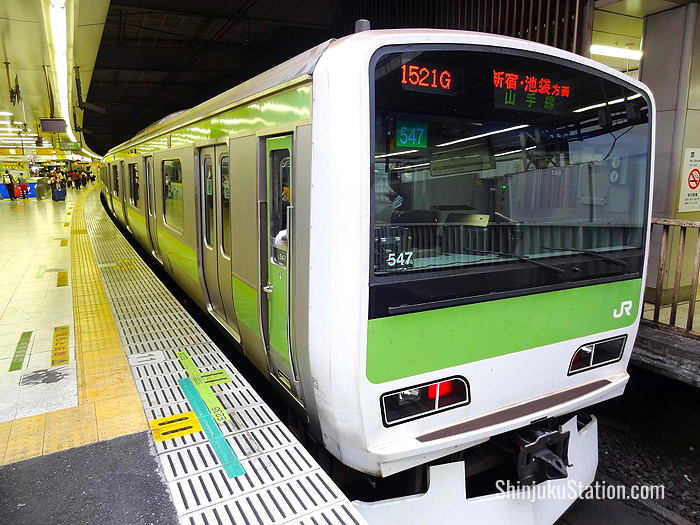 Shinjuku Station is aligned along a north-south axis. It straddles the Yamanote Line, which forms a loop through central Tokyo and is one of the busiest railways in the nation. Operator East Japan Railway Company (known as JR East) runs the main station at Shinjuku, so it’s sometimes distinguished as “JR Shinjuku Station.” See below for information about the satellite stations surrounding the JR complex. 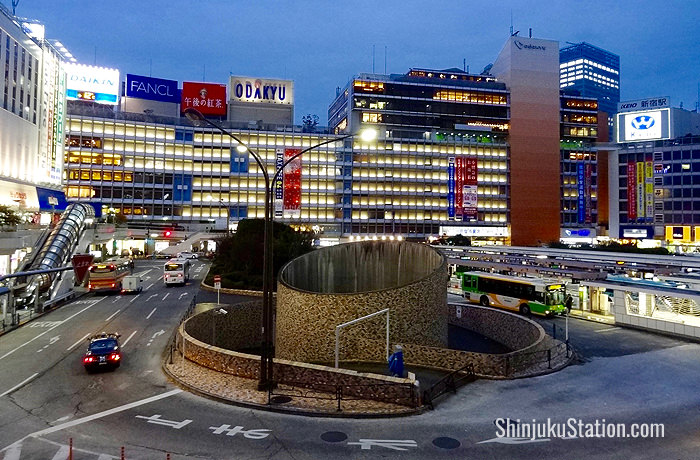 Department stores on the west side of Shinjuku Stationa

There are four major access points for Shinjuku Station: the West Gate, East Gate, South Gate and New South Gate, with many smaller ones in between. The West Gate faces Nishi-Shinjuku, the office and government district (there’s also a Central West Exit linking to the Keio Line). The East Gate faces Higashi-Shinjuku, a drinking and entertainment area, and is the closest exit for Kabukicho and Golden Gai, which are nightlife districts on the north side of Yasukuni-dori street. 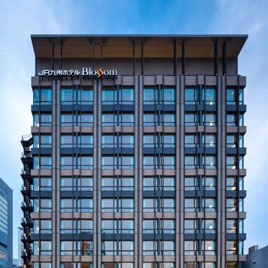 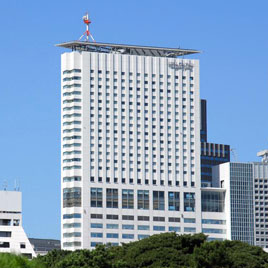 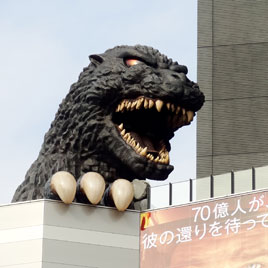 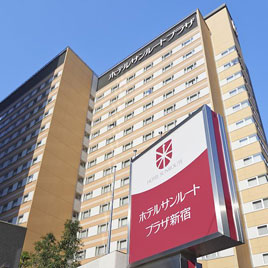 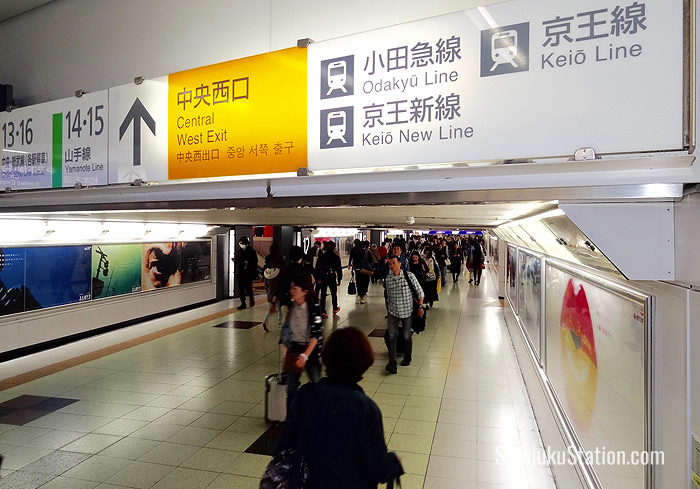 The JR Shinjuku Station building has interior passageways going east-west and north-south both on street level and below it. Depending on which entrance you use, you may find yourself either below or above the train platforms. Follow the signs to the platform you need. 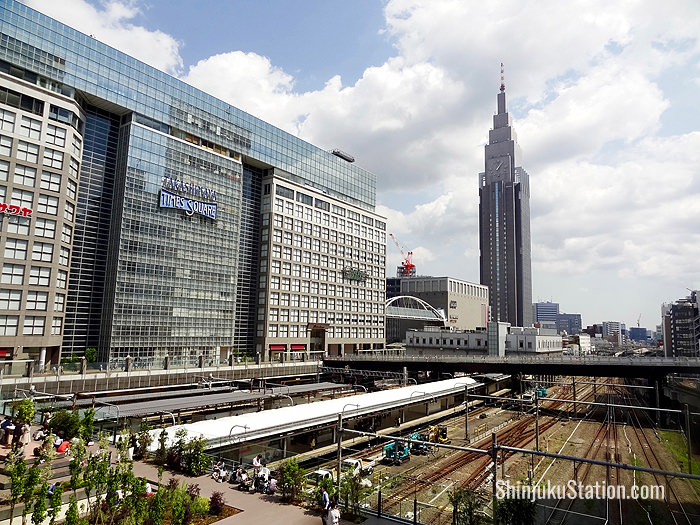 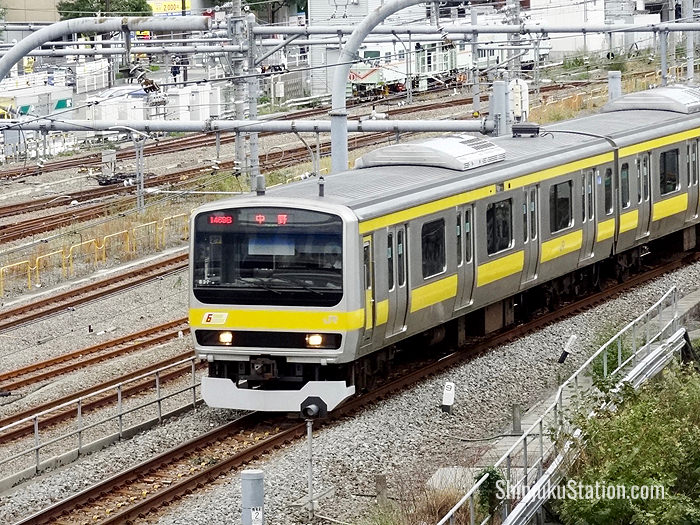 There are 16 JR platforms at JR Shinjuku Station. Each of the railways and rail services is color-coded and has two platforms, one for each direction (however, some lines share platforms or use multiple platforms). While it’s fairly easy to get to most lines from the West, East and South gates, note that the Narita Express (N’EX) trains for Narita Airport are closest to the New South Gate. 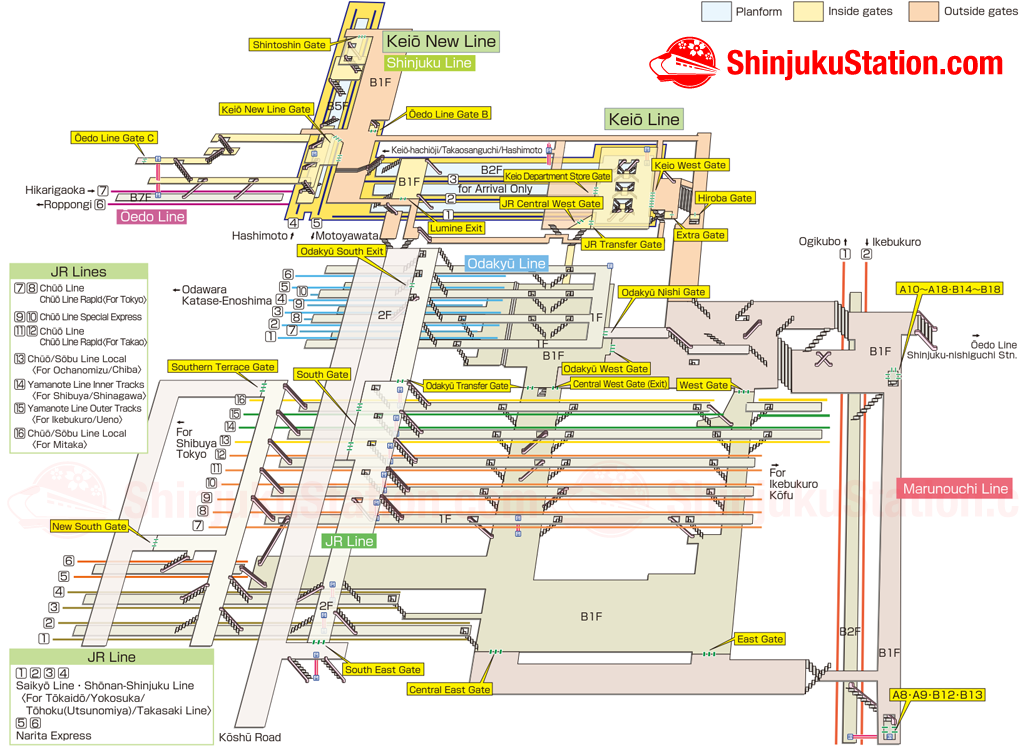 Platforms 1 to 4: Boarding for the Saikyo Line for Osaki and Shin-Kiba (on the Rinkai Line) as well as Akabane, Omiya and Kawagoe (via the Kawagoe Line). Boarding for the Shonan-Shinjuku Line for Ofuna, Zushi and Odawara (via the Yokosuka and Tokaido lines) as well as Omiya, Koganei, Utsunomiya, Takasaki and Maebashi (via the Utsunomiya, Takasaki and Ryoma lines). 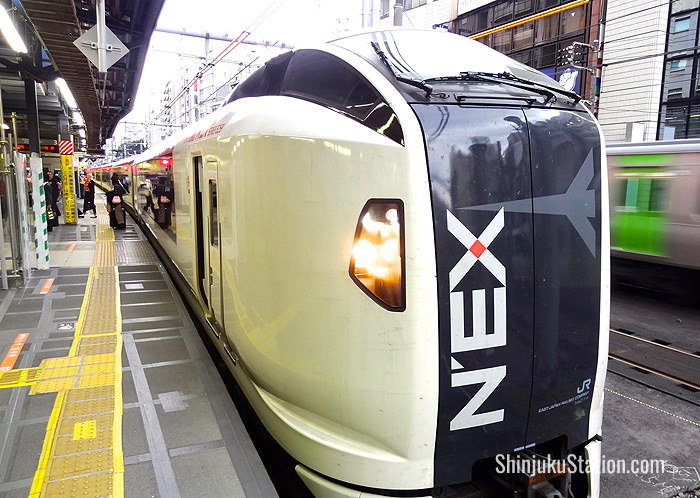 Platforms 7 and 8: Boarding for the Chuo Line (Rapid) for Ochanomizu and Tokyo, and the Chuo Line Azusa and Kaiji limited express services for Tokyo and Chiba. 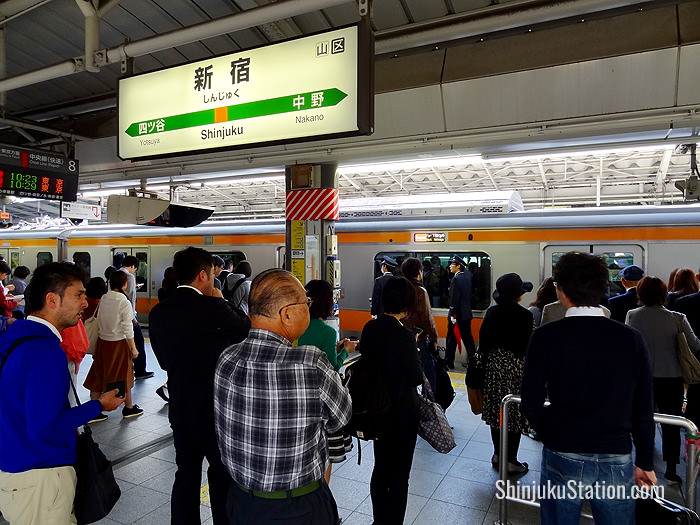 Platforms 9 and 10: Boarding for the Chuo Line Azusa and Kaiji limited express services for Kofu and Matsumoto.

Platforms 11 and 12: Boarding for the Chuo Line (Rapid) for Nakano, Mitaka, Tachikawa, Hachioji, and Takao.

Platform 13: Boarding for the Chuo-Sobu Line for Ochanomizu, Akihabara, Nishi-Funabashi and Chiba. 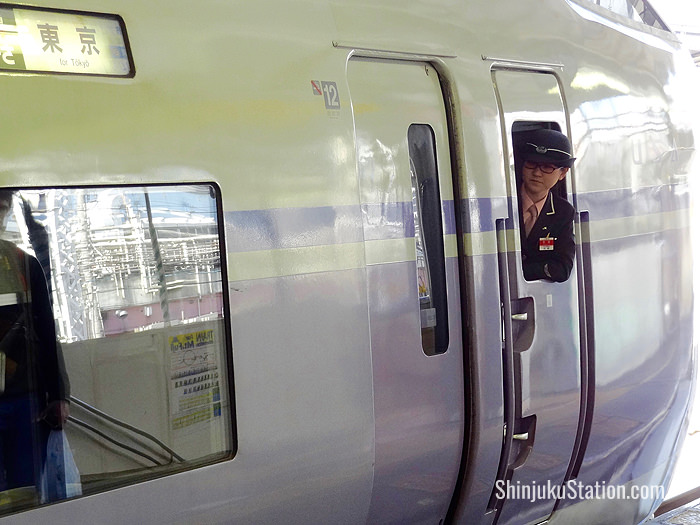 Platform 14: Boarding for the Yamanote Line for Harajuku, Shibuya, Shinagawa and Tokyo.

Platform 15: Boarding for the Yamanote Line for Ikebukuro, Nippori, Ueno and Tokyo.

Platform 16: Boarding for the Chuo-Sobu Line for Nakano, Kichijoji and Mitaka.

Apart from the JR lines described above, there are three other railway stations in and around Shinjuku Station, as well as seven subway stations within close proximity that are connected to it via underground passageways. 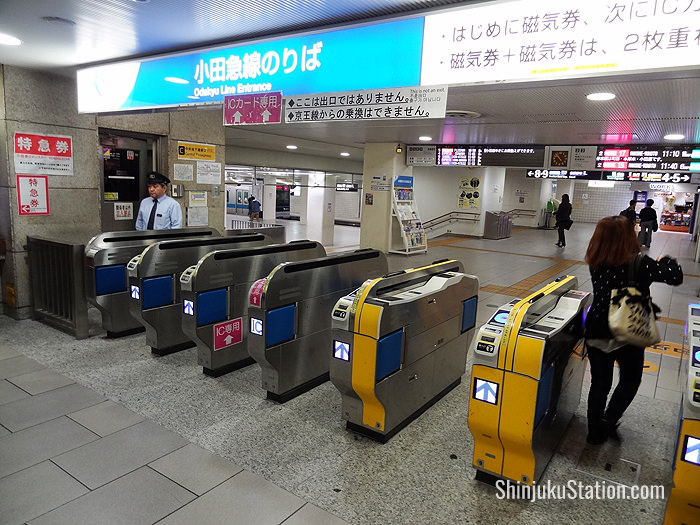 Ticket gates for the Odakyu Line at Shinjuku Station

Operated by Odakyu Electric Railway, this large station is on the west side of the JR Shinjuku Station complex and located under the Odakyu Department Store. The operator is a separate entity from JR East and separate tickets are required (but stored-value cards work on both). Known as the Odakyu Line, this railway is a convenient way of getting to Odawara in Kanagawa Prefecture southwest of Tokyo, where one can catch a train to the mountain resort of Hakone near Mt. Fuji via the Hakone Tozan Line. 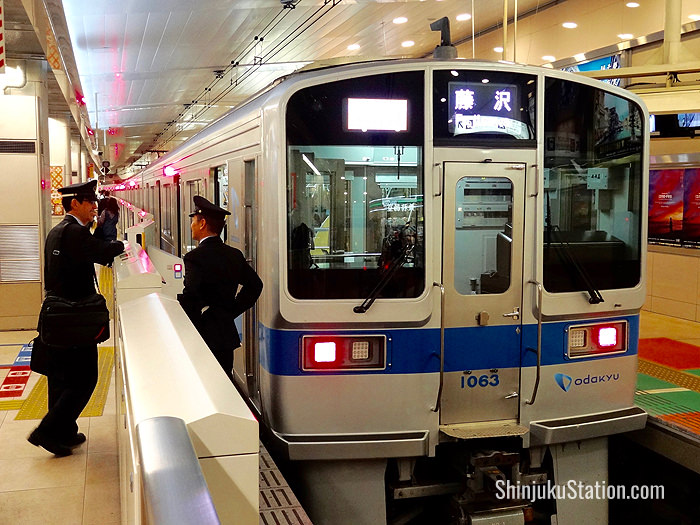 The Odakyu Line station can be accessed via the West and South gate areas as well as transfer gates within JR Shinjuku Station. Odakyu ticket reservation centers are located on both floors of a two-story concourse near the West Gate. The station is a terminus, with departing trains bound for Odawara and Katase-Enoshima. The 10 platforms here are split into two levels, with Romancecar limited express services leaving on platforms 2 and 3, express services on platforms 4 and 5, and local trains on platforms 8 and 9. 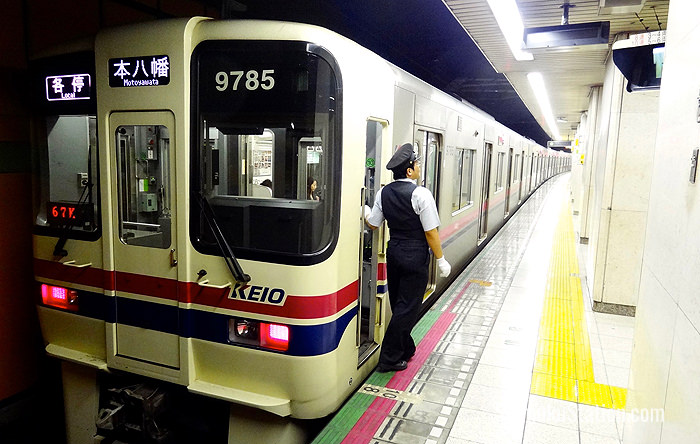 A Keio Line train bound for Motoyawata at Shinjuku Station

Like the Odakyu Line, the Keio Line is separate from JR East and requires separate tickets (but stored-value cards work on both). It’s located under the Keio Department Store on the west side of Shinjuku Station. The Keio Line connects Shinjuku with Meidaimae, Chofu and Keio-Hachioji in western Tokyo and is a convenient way to get to the Mt. Takao area, which is popular with hikers, via the Keio Takao Line.

There are three underground platforms at Keio Line Shinjuku Station, which is a terminus, with local trains on platform 1, and express services on platforms 2 and 3.

There are three platforms at Seibu-Shinjuku Station, with platform 1 serving local trains, and platforms 2 and 3 serving express trains. 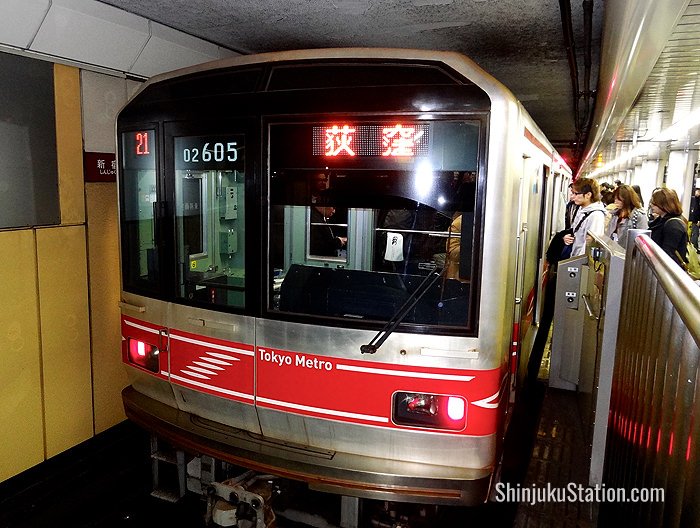 A Marunouchi Line subway bound for Ogikubo at Shinjuku Station

Located below the Metro Promenade underground mall on the northern end of Shinjuku Station, the Marunouchi Line is a subway running in an east-west U-shape from Ogikubo in Tokyo’s western suburbs through Shinjuku, Yotsuya, Ginza, Tokyo, and then continuing up to Ikebukuro, with a branch line to Honancho. The station can be accessed from the West or East gates at Shinjuku, but is closest to the former. 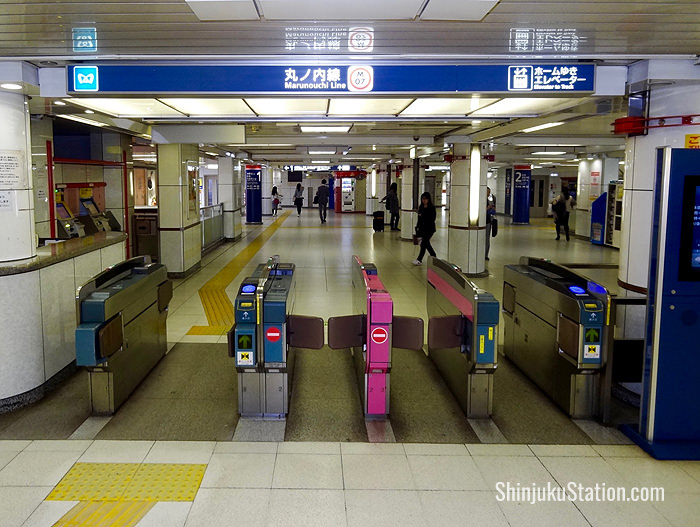 Ticket gates to the Marunouchi Line at Nishi-Shinjuku Station

Nishi-Shinjuku Station on the Marunouchi subway line is a few blocks to the northwest of Shinjuku Station, located in an area of offices and schools. It’s about 400 meters north of the Tokyo Metropolitan Government Buildings (city hall) and connected to it via underground passageways.

The Fukutoshin Line is a north-south subway running between the hubs of Shibuya and Ikebukuro on the western side of central Tokyo. It also links Shinjuku with Wakoshi and Shinrinkoen in Saitama Prefecture and Motomachi-Chukagai in Yokohama’s Chinatown (via the Tokyu Toyoko Line).

Shinjuku-Sanchome Station is located about 300 meters east of the JR Shinjuku Station complex, but they’re connected via underground passages. Directly above the subway station along Shinjuku-dori Street stand the Isetan and Marui department stores. 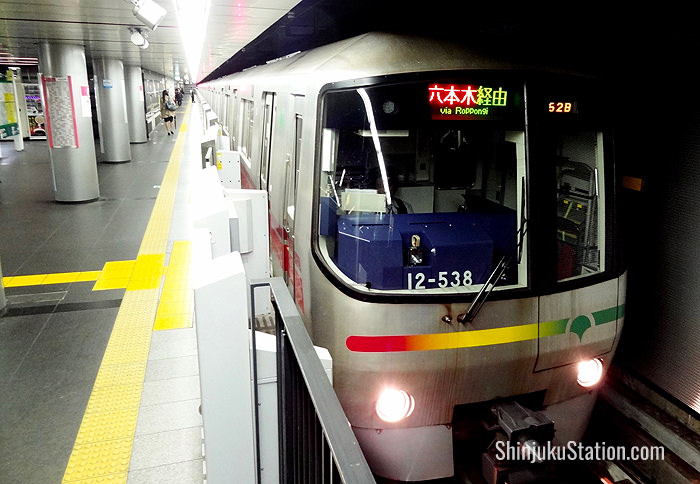 The Toei Shinjuku Line runs eastward from Shinjuku to Kudanshita, home of Tokyo’s Yasukuni Shinto shrine, the Jimbocho bookseller district and Motoyawata in Ichikawa, Chiba Prefecture. The subway has trough service with the Keio Line going westward from Shinjuku, but has a separate station known as Keio New Line Shinjuku. It’s located under Koshu-Kaido Street by the southwest corner of JR Shinjuku Station, and can be accessed via a stairway and escalator from the South Gate area.

The Toei Oedo Line subway forms a near-loop under central Tokyo, with a branch going westward from Tochomae under the Tokyo Metropolitan Government Buildings (city hall) to Higashi-Nakano and Hikarigaoka. The Oedo Line also has stations in Iidabashi, Ueno, Ryogoku, Tsukishima, Shiodome, Daimon, Roppongi, Aoyama and Yoyogi among other areas.

Connected to the West Gate of JR Shinjuku Station, Shinjuku-Nishiguchi Station has trains running on the northern arc of the Toei Oedo Line subway near-loop. It’s one stop away from Tochomae Station to the west.

Located directly under the Tokyo Metropolitan Government Buildings, the iconic cathedral-style tower designed by Kenzo Tange and serving as the capital’s city hall, Tochomae Station is where the northern and southern arcs of the Toei Oedo Line come together.

Other Stations in the Shinjuku Area