Across the street from the west side of Shinjuku Station, you’ll find one of Tokyo’s largest electronics shops: Yodobashi Camera. The flagship branch of this national chain, named after a former Shinjuku town and opened in 1975, is a sprawling group of 13 “pavilions” (buildings and nearby shops) that has far more than just cameras. 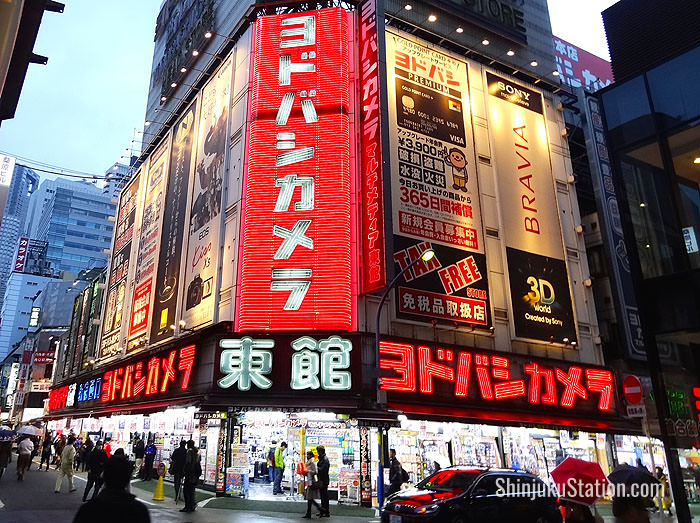 Yodobashi Camera presents a sensory experience that can be surprising for travelers. The store is lit up with garish neon signs on the outside, and advertising posters cover virtually every inch of space on the inside. 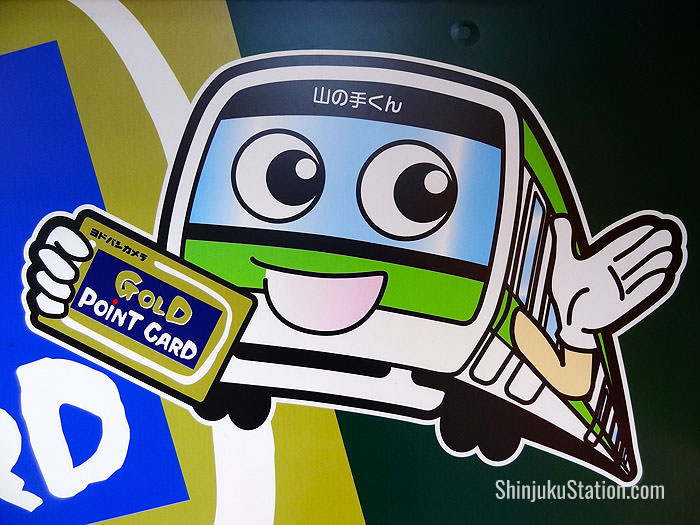 Based on the popular JR Yamanote trains, Yamanote-kun is Yodobashi Camera’s mascot

Then there are the clerks welcoming customers with shouts of “Irrashaimase!” and the Yodobashi Camera jingle playing on the sound system – it might remind you of the American patriotic song “Battle Hymn of the Republic.” 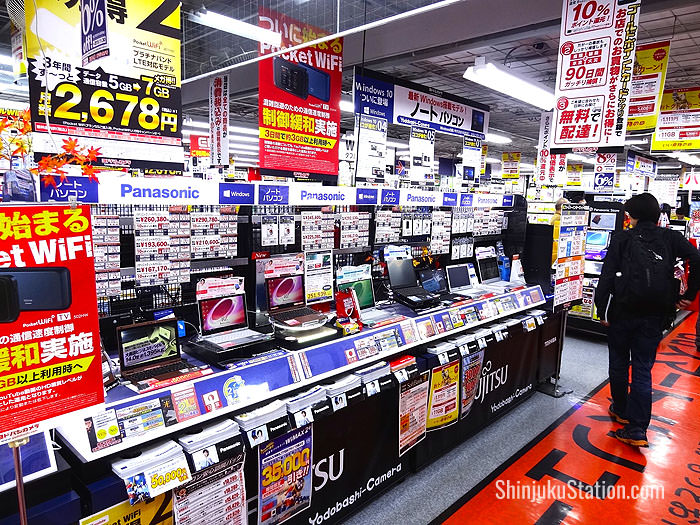 Yodobashi Camera’s interior is festooned with advertising and logos 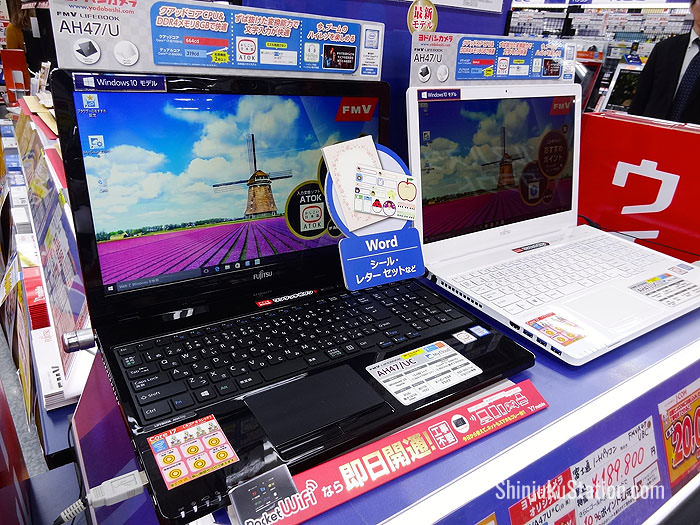 The north wing of the Multimedia Pavilion is nine stories tall including a basement, with laptops, mobile devices and other computers on the ground floor; peripherals such as keyboards and printing supplies are in the basement. 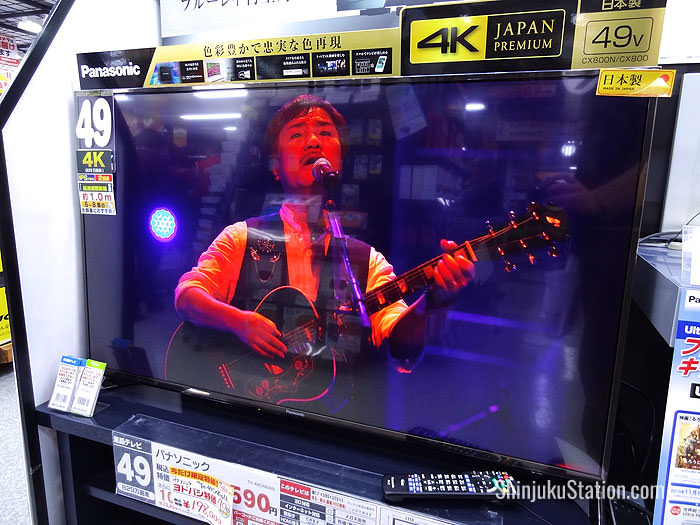 On the third floor, you’ll find LCD flatscreen TVs including screens with 4K (3840 x 2160) resolution, Blu-ray and DVD recorders and other audiovisual gear. 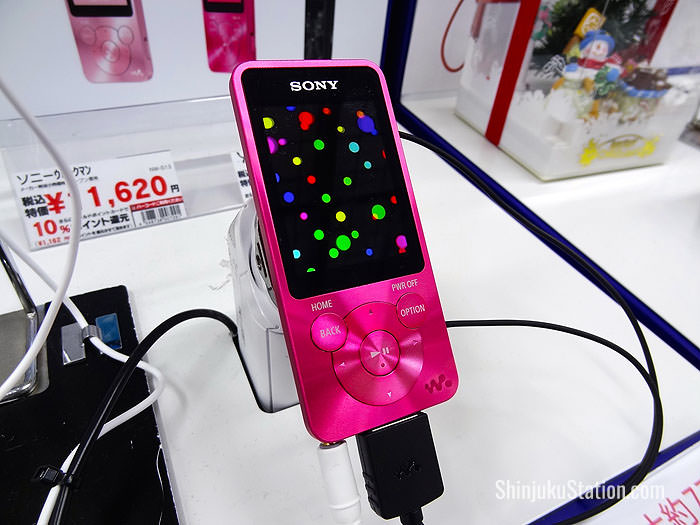 One floor up on 4F there are digital audio players, headphones, portable recorders, GPS and car navigation units, as well as stereo speakers.

If you’re considering buying electronics in Japan, however, be sure that the product has an operating system, menu options and instructions in your preferred language. 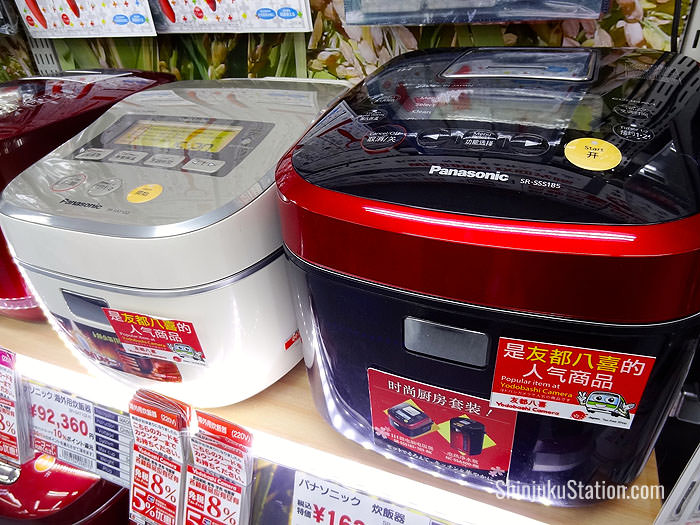 Made-in-Japan electronic rice cookers from Panasonic have instructions in English, Chinese and Japanese

The fifth floor of the Multimedia Pavilion has a range of kitchen and home appliances including advanced electronic rice cookers, coffee machines, microwave ovens and refrigerators. 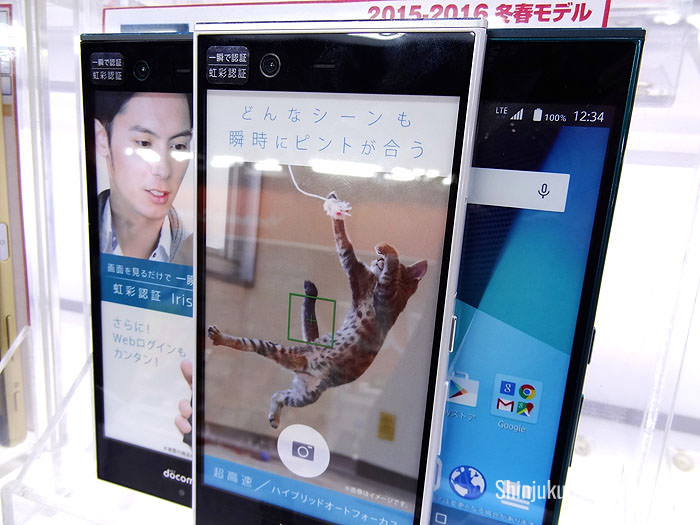 On the first floor of the south wing of the Multimedia Pavilion, you can see the latest Japanese smartphones on offer from carriers NTT DoCoMo, KDDI and SoftBank. But they will only sell handsets to people living in Japan who take out a contract with them. The Keitai Accessories Pavilion across the street to the south has a range of phone covers and straps. 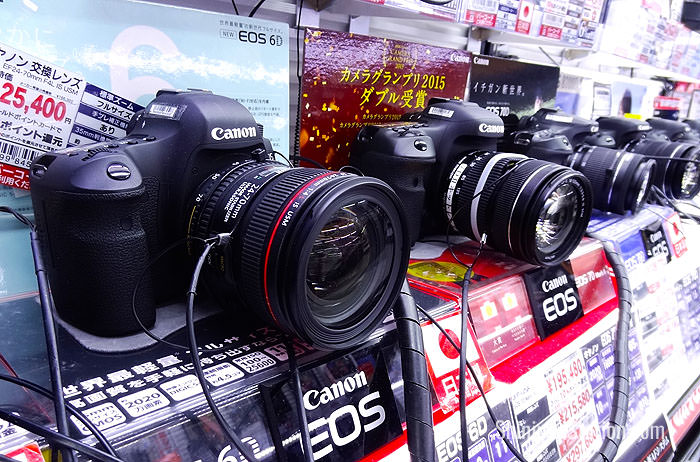 Cameras, once the bread and butter of Yodobashi Camera, are found both on the first floor of the south wing of the Multimedia Pavilion and throughout the dedicated Camera Pavilion across the street to the south. Yodobashi stocks everything from compact digital cameras to digital single-lens reflex cameras and medium- and large-format cameras. It also carries a large range of film from Fujifilm and other makers (in the nearby Repair and Film Pavilion). 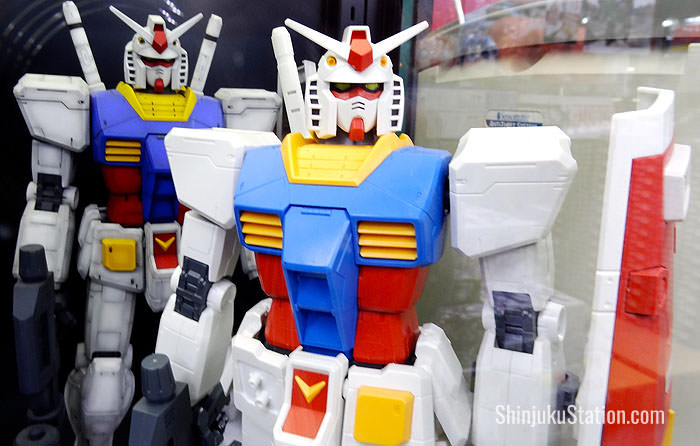 Mobile Suit Gundam figurines in the Game and Hobby Pavilion

One block west of the Multimedia Pavilion is the Game and Hobby Pavilion, which stocks all manner of otaku (geek) toys from Nintendo video games and consoles to plastic figurines and model kits featuring robots from the Mobile Suit Gundam anime franchise.

Yodobashi Camera has a number of other pavilions in the vicinity including travel goods, watches, photo printing services and even adult videos. There are English-language maps for the pavilions on the walls of the Multimedia Pavilion.